Race in the Catch the Leprechaun 5k, test your stand up paddle boarding skills at the Lowcountry Active Outdoors Expo, enjoy live performances at the Spring Jam Music Fest and catch a South Carolina Stingrays hockey game at the North Charleston Coliseum. These are just a few of the exciting events coming up in Charleston, South Carolina. Mark your calendar today so that you can attend these Charleston events.

Visiting from out of town? Contact our Charleston hotel partners for discount rates. We look forward to seeing you at these exciting Charleston events! 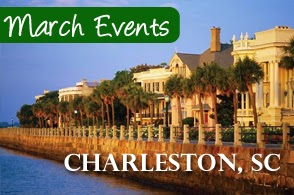 Ringling Brothers and Barnum and Bailey Circus
March 5 - 9, 2014
Ringling Bros. and Barnum & Bailey Presents Built To Amaze! , the 143rd edition of the Greatest Show On Earth. Surprise and wonder delights audiences with over the top feats of strength, agility and courage. As the momentum builds so does the anticipation, anything can happen when Ringling Bros. Presents Built To Amaze. Contact the North Charleston Coliseum today at 843-529-5000 to purchase your tickets.

Mindless Behavior, Marcus Luttrell & Hootie and the Blowfish in Charleston SC
March 2014
Catch some of your favorite performers at the North Charleston Coliseum & Performing Arts Center this March 2014! Mindless Behavior will perform live on March 8, 2014. Marcus Luttrell brings his Patriot Tour to North Charleston on March 15, 2014 and Hootie and the Blowfish invite guests to their Bulls Bay Invitational Concert on March 22, 2014. Call 843-529-5000 to purchase your tickets.

Catch The Leprechaun 5k
March 13, 2014
Catch the Leprechaun is a 5K run/walk held at the Mount Pleasant Memorial Waterfront Park. The race will feature a pot of gold for the men’s and women’s winners, a prize for runners who finish before the leprechaun and a post race ceremony featuring live music and refreshments. Proceeds from the event will benefit Pattison’s Academy for Comprehensive Education (PACE). At 6:10PM, the bagpiper will start playing. This is your signal to get ready to run as he will be leading the runners/walkers to the starting line shortly after the music begins.
Your race registration includes admission to the St Patrick's Day party. There will be food, drinks, beer (for anyone over 21) and live music.

Brian Regan at North Charleston Performing Arts Center
March 21, 2014
Critics and peers agree: Brian Regan has distinguished himself as one of the premier comedians in the country. The perfect balance of sophisticated writing and physicality, Brian fills theaters nationwide with fervent fans that span generations. With his first appearance on The Late Show with David Letterman in 1995, Brian solidified his place on the show and in 2012 he made his 25th appearance, the most of any comedian on the CBS show. It is the quality of his material, relatable to a wide audience and revered by his peers, which continues to grow Brian’s fan base. Call 843-529-5000 to purchase your tickets.

The Oak Ridge Boys
March 27, 2014
The Oak Ridge Boys will perform live in concert at the North Charleston Performing Arts Center on March 27, 2014. Get your tickets today to hear one of the most distinctive and recognizable sounds in the music industry. The four-part harmonies and upbeat songs of The Oak Ridge Boys have spawned dozens of Country hits and a Number One Pop smash, earned them Grammy, Dove, CMA, and ACM awards and garnered a host of other industry and fan accolades. Every time they step before an audience, the Oaks bring four decades of charted singles, and 50 years of tradition, to a stage show widely acknowledged as among the most exciting anywhere. And each remains as enthusiastic about the process as they have ever been. Call 843-529-5000 to purchase your tickets.

Spring Jam Music Fest
March 29, 2014 from 12PM - 9:30PM
The 2014 Spring Jame Music Fest presents 2 stages and 10 bands at Brittlebank Park in Downtown Charleston. The Wild Feathers, Augustana, Saints of Valory, Kopecky Family Band and more will perform live on stage! Plus, there will be side show acts, an arts and goods village and delicious eats and treats. Call 843-412-6122 for more information.

Lowcountry Active Outdoors Expo
March 30, 2014 from 10AM - 4PM
Spring is almost here! Have you ever wanted to try Stand Up Paddle Boarding? How about Kite Boarding or Kayaking? Do you want to work on your golf game, find an instructor or try out some new clubs? Test a New Bike or do some Batting Practice? Attend the Lowcountry Active Outdoors Expo at Joseph P Riley Park and try that sports equipment or outdoor activity to see if you want to buy. Exhibitors from all outdoor sports: Golf, Tennis, Cycling, Surfing, Sailing, Kite Boarding, Fishing, Water Skiing, Skate Boarding, Kayaking, SUP's, Outdoor Outfitters and Clothing, and any other activity you can experience here in the Lowcountry. A Children's area with games and jump castles will be open. If you were planning to have a nice Sunday brunch, attend The Stella Artois Cidre VIP Blues Brunch. Brunch and Boogie to the Blues from 11AM until 2PM. Call 843-277-8770 for more information.