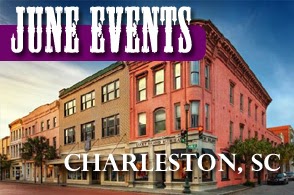 Compete in the 2014 Carolina Billfish Classic, enjoy dinner and live music on the Blues & BBQ Harbor Cruises, dance the night away Shaggin' on the Cooper, and catch a live performance at the North
Charleston Coliseum and Performing Arts Center this June 2014.


Palmetto Breeze 2 for Tuesday Sunset Sail
Tuesdays Now - July 29, 2014
Head out from Shem Creek on board Charleston’s ultimate catamaran, the largest capacity sailing catamaran north of Ft. Lauderdale, FL and set sail venturing to see dolphin, turtles, shore birds and the beauty of the Charleston Harbor at sunset with our "2 for Tuesday" BOGO deal! Buy one ticket and get one for FREE! The 2 hour Charleston Harbor Sail includes complimentary Bottled Water and Soft Drinks. Cash bar available for Beer, Wine & pre-mixed Margaritas. Call   843-886-8133 to reserve your spot!

2014 Race The Landing
June 5 & 12, 2014
Before there was a bridge, there was the landing. This season, you’re invited to the second annual Race The Landing 5K race series, where the original settlers of Charles Towne made their home. There will be food, beer, awards for 5 year age groups and 5 deep, live music, commemorative gifts and door prizes. Bring the kids, this is a family event. Call 843-224-7878 for more information.

Fourplay at the North Charleston Performing Arts Center
June 7, 2014
Bob James, Nathan East, Harvey Mason and Chuck Loeb - The Fourplay story begins in 1990, with keyboardist Bob James, who had already established himself as a formidable figure in keyboard jazz – not just as an instrumentalist but as a composer and arranger as well – with solo recordings dating as far back as the mid 1960s. In 1990, James reunited with his old friend, session drummer, producer, composer & recording artist Harvey Mason (Herbie Hancock, Barbra Streisand, Notorious B.I.G.), during the recording of James’ Grand Piano Canyon album. The Grand Piano Canyon sessions marked the genesis of the group that eventually came to be known as Fourplay. Their self-titled debut album was released in 1991, and included a blend of jazz, R&B and pop. Call 843-529-5000 for tickets.

Award-Winning Christian Young Adult Author Nicole Quigley at Barnes & Noble
June 8, 2014 from 1:30PM - 4:30PM
Meet award-winning young adult fiction author Nicole Quigley on Sunday, June 8, 1:30-4:30 pm.  Nicole is the author of "Like Moonlight at Low Tide," published by Zondervan/HarperCollins and winner of the 2013 American Christian Fiction Writers "Carol Award" for young adult fiction. USA Today calls the story of what happens to a girl after she's been a bullied a "recommended teen read" and a "...darkly poignant inspirational romance that will linger in the mind well after reading it." Visit www.nicolequigleybooks.com for more information.

The Head and The Heart
June 12, 2014
It wasn't that long ago that the members of Seattle's The Head and the Heart were busking on street corners, strumming their acoustic guitars, stomping their feet and singing in harmony as they attempted to attract the attention of passersby. That unbridled energy informed their earliest original material, which was honed in local clubs before eventually being captured on the band's 2011 debut album for hometown label Sub Pop. Then, something unexpected happened. That music began to reach audiences all over the United States and the rest of the world, and The Head and the Heart went from playing open mic nights to selling out headlining shows in prestigious venues. Call 843-529-5000 for tickets.

Shaggin' on the Cooper
June 14, 2014 - Shem Creek Boogie Band
Dust off your dancing shoes and get ready for summer and Shaggin’ on the Pier! Live music will fill the air with local bands performing throughout the season at the Mount Pleasant Pier. All ages are invited to let loose, breathe in the ocean breeze and dance the night away under the stars. Food and beverages will be available for purchase. Call 843-795-4386 for more information.

Love & Laughter Tour
June 28, 2014 at 8PM
R&B sensation Charlie Wilson and comedian Rickey Smiley star in the Love & Laughter Tour at the North Charleston Coliseum. Doors open at 7PM and the show begins at 8PM. Do not miss your opportunity to see Charlie Wilson and comedian Rickey Smiley perform live in Charleston, South Carolina. Tickets range from $46.50 to $96.50 per ticket. Call 843-529-5000 to purchase your tickets today.